I started testing Server 2019 as a Hyper-V host a few days ago, but getting the GUI manager to connect was a bit challenging. This article will be about as much documentation for me to set this machine up again as it will be instructive.

This machine is non domain joined.

First, name the computer what you want its final DNS name to be with Rename-Computer. Then reboot so you will avoid the issue described in the second half of the post.

Next, enable CredSSP with Enable-WSManCredSSP -Role Server and ensure that the appropriate fresh credential delegation, trusted hosts, and permit-CredSSP GPOs are applied on the client. Check also that the WinRM service is running on the client, and if there are still issues with lacking "permission to complete this task" while connecting with the manager, also run Enable-WSManCredSSP with the client role, delegating to the appropriate host.

Then, hopefully, the Hyper-V manager will just connect.

Now, for the problem I had, and as many details as feasible so the next person Googling for it will find this post.

The error that appeared was:

"Hyper-V encountered an error trying to access an object on computer 'LF-HV02' because the object was not found. The object might have been deleted. Verify that the Virtual Machine Management service on the computer is running". 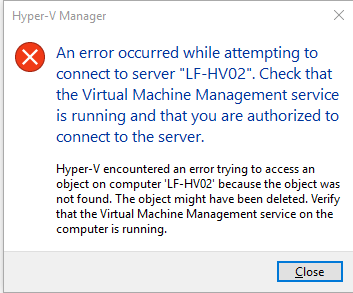 I then investigated the event logs on the target system. In the WMI-Activity/Operational log, I found an error with event ID 5858, and result code 0x80041002:

When poking around at the mentioned CIM object with Get-CimInstance -ClassName 'Msvm_VirtualSystemManagementService' -Namespace 'root\virtualization\v2', I found that the system name was some randomized name starting with WIN-. So, I renamed it to what it was supposed to be called with Rename-Computer, rebooted, and that fixed the issue.