Say you have to contribute to some project run by Unix bros who want the 90s back, so they don't use GitHub or its many self-hosted alternatives to accept pull requests, and you need to email them a patch. I would find it entirely understandable to want to get a quill pen and write a letter on paper for fun instead of dealing with mailing lists and emailing a patch.

Unfortunately, sometimes one needs to engage in the much less pleasant form of anachronism of contributing to this kind of software anyway, as mailing lists with patches are still very common in the land of older system software under the C. The patch-emailing features of git are some of its most infamous for poor usability, which is saying something, because git as a whole is known for being hard to use.

For those who are unfamiliar with the email-patch infrastructure, git is extremely picky about emails being the exact format it likes and not getting modified at all by the client. This means that in practice, you need to send your patch emails using git send-email as your email client.

Theoretically, https://git-send-email.io/ (by someone who made their own new git source hosting service that mysteriously uses emails to submit patches) will tell you how to set it up. Well, except if git send-email has other ideas: it would not send through my email provider for reasons that must have been a bug: I seem to recall it was something to do with either a TLS or SMTP implementation being broken.

I ended up needing to use a separate Mail Transfer Agent (SMTP-speak for "SMTP client") and plumb it into git. For this, I used msmtp.

First, store your SMTP email password in the system keyring:

I use KDE, so this setup uses the KDE wallet to store the password. If you use macOS, GNOME or the future version of KDE that supports the freedesktop secrets system, remove the passwordeval line from the sample config here as msmtp can get the password from your keyring by itself.

Then write a msmtp configuration file:

Then configure git (I keep this in ~/.gitconfig as I don't really want to check it in for spam reasons, whereas most of my git config is checked in and stored at ~/.config/git/config):

Finally, you can send an email:

And, yes, it was received: 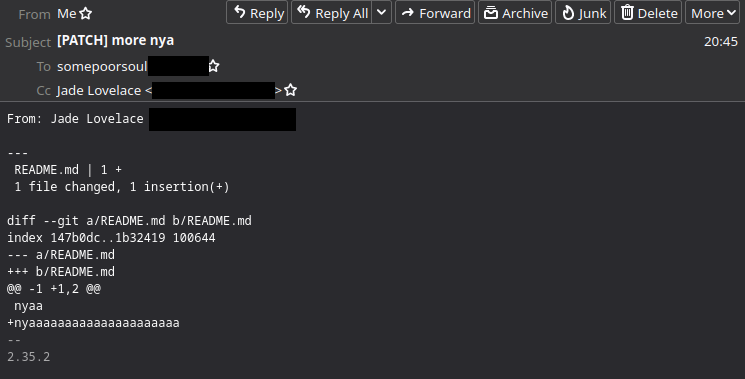 See? That was very hard for no reason.